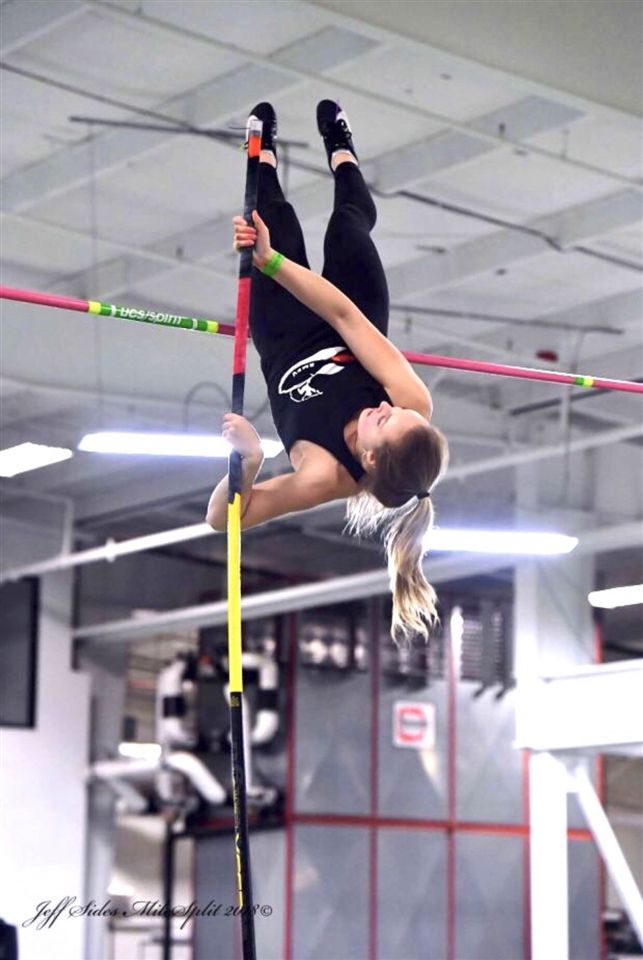 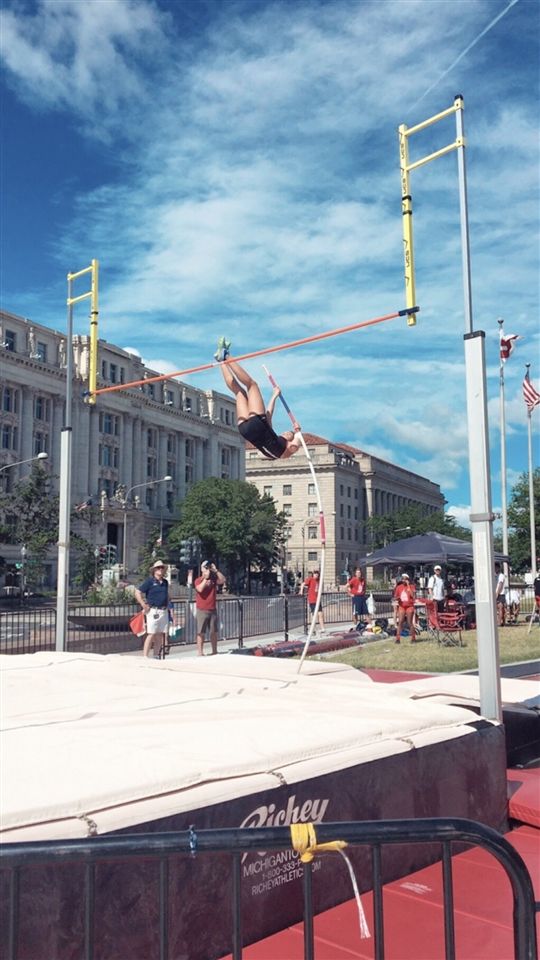 5/1/2019
Two-time pole-vaulting state champion Hadley Zucker, ’20, always thought her future was as a collegiate pole vaulter. Then she tore her ACL and meniscus at a training session.
“Tearing my ACL was the best—but worst—thing that could happen to me,” says Zucker. “I was at my peak, and it cut me off completely, but it allowed me to figure out what I was missing in the rest of my life.”
Prior to the injury, Zucker had cleared personal-best bar heights of 11’ 2” and 11’ 6” in competition and in practice. And then, all of a sudden, she was injured, and doubt began to enter her mind.

“I kind of lost all hope, because I was planning to vault in college,” says Zucker. The injury forced her to reassess her own plans for her future.
“I used to think that academics didn’t really matter, because vaulting would get me to where I wanted to be,” says Zucker. “When I tore my ACL, I decided that I really needed to focus on my academics.”

Now, Zucker’s main goal is to earn credentials as a pediatric oncologist, or perhaps a pediatric sports therapist, and to be a collegiate pole vaulter. Of course, after a long recovery, she is back vaulting, with her eyes set on clearing a personal best and defending her state championships.
“There’s so much more to life than sports,” says Zucker. “And sports alone aren’t going to take me as far as I want to go.”

Zucker joined Davidson Day at the beginning of the 2017–2018 school year, seeking a strong community.

“Academics and athletics are the two things I wanted to balance,” says Zucker. “I knew that Davidson Day would allow me to excel in both.”
Throughout the spring season, Zucker trains with Rocket Man, a pole-vaulting club based in Mooresville, in addition to vaulting for Davidson Day.
And, she is now also participating in the 100-meter and 4x100-meter events as a part of Davidson Day’s Varsity Track & Field team.
“Being part of a team here is so fun,” says Zucker. “The atmosphere is so welcoming, and I don’t think I would want to be anywhere else other than Davidson Day.”
Of Davidson Day’s 27 head coaches, 23 of them are full-time faculty or staff members. They’re present in the community, and they’re present for their student-athletes, says Zucker. “The fact that teachers are the coaches here means that you can build a bond academically and athletically, a bond that can really last a lifetime.”
It’s a family feel, with the added challenge of training for future goals. A close-knit team—like Zucker’s Rocket Man club team and like the Varsity Track & Field team at Davidson Day—is all about great community, says Zucker.
“They’ll go through everything that you go through, you’ll push through hard workouts together, you succeed, you fail, you do everything together,” says Zucker.   “That’s also how Davidson Day’s community feels—it’s a small community, but it is so welcoming.”
A primer in the pole vault
According to Zucker, not many people understand the pole vault. Or at least, not really. All they see—on the off chance it’s picked up and televised, perhaps during the Olympics—is the seeming effortless success of the top pole vaulters in the world.
In reality, says Zucker, pole vaulting is terrifying. And exhilarating.
“It is such a dangerous sport, no one has the guts to do it,” says Zucker. “I’ve tried convincing so many people, but no one will do it.”
Zucker found the sport as a student at Woodlawn. Not more than three days after the track and field coach installed a pole-vaulting pit, Zucker found herself sprinting toward the box carrying a fiberglass pole.
She’d agreed to give the sport a try.
“I was horrible, I was jumping like only five feet, and I was going off the wrong side and the wrong leg,” says Zucker. “I did everything completely wrong, but it was so much fun.”
She was hooked. “I loved it ever since.”
As the pole vault is a complex, technical event, it requires a great degree of athletic skill and the willingness to launch your own body into the air using a flexible, bending rod.
To compete, pole vaulters require the leaping strength of any good jumper, the proprioceptive control of their own body in midair, and the speed of a top sprinter—all while being able to control and operate whilst carrying and wielding a long, flexible pole.
“It’s such a good feeling to clear a bar that you never expected to clear,” says Zucker. “When you push the pole away, and you see the bar under you, and you know you’re going to clear it, it’s such a rush.”
Skills for life
“There are so many things that you learn through pole vaulting, that you can learn in the course of your life, that will be beneficial,” says Zucker. For her, one lesson came following her injury: patience.
“I need to be patient, and things will slowly be put together,” says Zucker.
Take her decision to invest her energy and effort in her academic career.
A comprehensive study of anatomy and physiology with Mrs. Julie Brown gave Zucker a foundational understanding of the human body, and the human body in motion. Coursework also enabled her to follow an interest in neuroscience and into understanding the brain.
And the effort extended in acquiring academic knowledge is now helping Zucker chase her own personal best now that she’s back on the approach, staring down the track to the box, ready to vault.
“I’m much more interested in quality, now, rather than quantity,” says Zucker. “I am now much more focused on the technical aspect of the vault.”
This can pay dividends. Coaches, at least on the NCAA level, says Zucker, will be able to see natural talent on film. But what matters is the hard work, effort, and energy invested in honing and refining technique.
“With pole vaulting, there are so many small pieces that go into the technique, there are so many things that you’ll learn,” says Zucker.
When that work is done, the results will show up, and they’ll speak louder than talent on video, says Zucker, “NCAA coaches want you to be able to score NCAA points before they’ll even consider you.”
“I have to trust that what we’re doing is going to enable us to clear high bars,” says Zucker. “I know what I need, and I know what I am doing now,”
With trust, and repetition, comes confidence. “I’ve built a whole layer of confidence, and I can sense it radiating from me.”
That confidence helps in the classroom. And it helps at the track meet, too, when you’re on the vault, says Zucker. “And you’re 13 feet in the air.”
Back